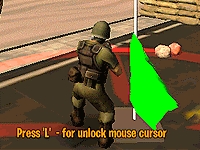 Enter the Crazy Warfare of capturing flags, or being a part of an online death match shooting game. Five different soldier types are awaiting you to make a decision and enter the battlefield. Inside, up to 8 people will either fight in teams in claiming flags and winning the war, or they will enter into a shooting frenzy of a death match where everyone is a dangerous enemy. Three maps in total, few different weapons, lots of tactical locations for gaining advantage over the enemy, and tons of shooting fun in this Crazy Warfare shooting game. Crazy Warfare is a game that you can enjoy playing at friv56.com. Here you can discover & enjoy Crazy Warfare game and many other Friv 56 games online at no cost.