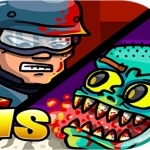 SWAT VS ZOMBIES – a really cool game about a guy who alone decided to get to the den of zombies and conduct a hard war there. Buy weapons in the store and shoot a zombie from 16 types of weapons. Ecaps Games with tons of games for all ages and bringing fun to player Play free online games Have fun! Play EG Swat Wars online at friv56.com. You can play it in fullscreen to have fun with it. EG Swat Wars is a great Friv 56 game to play with no cost.

Use Left Mouse button to Play