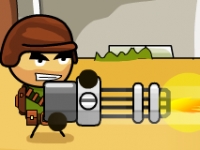 This game is the greatest action game, is combination of fighting games and shooting games. Like other fighting games, you will be brought to the awesome adventure world, have to face against many aliens, monsters and mighty opponents but more than that, you have an opportunity to show off your shoo Play Soldier Legend online at friv56.com. You can play it in fullscreen to have fun with it. Soldier Legend is a great Friv 56 game to play with no cost.